The purpose of this chapter is to explain how English is produced by describing the sounds (phonemes) we use in speaking and to explain the relationship among different phonemes. Phonetics is the straightforward business of describing the sounds that we use in speaking while phonology is the study of the relationships among the different phonemes. This chapter therefore discusses organs of speech, Sound of English: consonant & vowel sounds.

Organs of speech as a term is used to refer to the various parts of the human body involved in the production of speech sounds. It is important to note however that these organs were not primarily made for speech production but have this function added to their primary functions as part of the human body (Akinjobi, 2000). 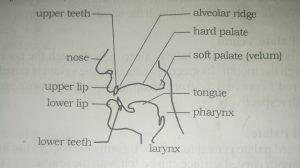 The normal way to begin speech production is for some of the air in the lungs to be pushed out; this process is known as “eggressive plumonic airstreams’. The lungs are like sponges that can be filled with air and they are contained within the rib cage. If the rib cage is lifted upwards and outwards there is more space in the chest for the lungs and they expand, with the result that they take in more air. If we allow the rib cage to its rest position quite slowly. some of the air is expelled and can be used for producing speech sounds (Roach, 2002).

This is a tube which begins just above the larynx. It serves as a boundary between the oral cavity and the nasal cavity. One part of the pharynx forms the back of the mouth while the other part forms the beginning of the way through the nasal cavity.

The hard palate is next to velum. It forms the roof of the mouth Its smooth curved surface can be felt with the tongue.

The Alveolar is also called the ‘Teeth Ridge’. This is a small muscular organ next to the hard palate. It is between the upper front teeth and the hard palate. When the tongue makes contact with the teeth ridge, Alveolar sounds are produced.

This is a very important organ of speech. The tongue can be moved into many different places. It is usually divided into different parts tip. blade, front middle, and back and front.

The teeth (especially the upper ones) are very useful in speech production. The teeth are attached to both sides of the mouth.

The Phonemes of English

The phoneme is the smallest indivisible unit of English

sound responsible for meaning. Adeyanju (2003) defines phoneme as the minimal sound unit of a language capable of distinguishing words of different meanings. The difference in the meanings of the words “ban’ and ‘tan’ lies in the distinction of their initial consonant sounds /b/ and /t/. There are forty- four sound segments in English comprising twenty vowels and twenty-four consonants. The sound inventory can be broadly divided into two: vowels and consonants.

The vowel sounds are produced without obstruction to the air flow generated from the lungs and passes through the vocal tract. They can be classified into short vowels, long vowels, diphthongs and triphthongs.

In producing /I/ sound the front of the tongue is raised high close to the roof of the mouth, the sides of the tongue are relaxed, and the mouth is slightly open.

In producing/e/sound the front of the tongue is raised halfway. the sides of the tongue are made to touch the upper teeth slightly, the mouth is open, while the lips are spread.

In producing /æ/sound the front of the tongue is lowered, the mouth is widely open and rounded, and the tip of the tongue touches the lower front teeth. Examples:

In producing /^/ sound the centre of the tongue is lowered, the lips assume a spread position, while the mouth is open.

/D/
In producing /D/sound the back of the tongue is lowered, the mouth is widely open, and the lips are slightly rounded. Examples:

In producing // sound the back of the tongue is raised high close to the soft palate, the mouth is almost close, leaving some space for air to pass through.

In producing/a/ sound the centre of the tongue is raised up to the middle of the mouth. It is called a schwa sound.

In producing /i:/ sound the front of the tongue is raised very high close to the root of the mouth, the sides of the tongue are pressed against the upper teeth with just a little space in the middle of the tongue and the roof of the mouth, while the lips are spread. Examples: bee, need, keen, feel, tree, free, deep, peel, read, east, tea, leal, leap, reap, heap, team, lead, chief, thief, field, piece, belief, seize, received, deceived, ceiling, receipt, legal, theme, thesis, me, police, prestige, machine, amoeba, foetus, quay, key, suite, people see, beat, beast, reason, neat, etc.

In producing /a:/ sound the back of the tongue is lowered or made flat by allowing it to rest against the lower teeth which is fully pass, staff, after, cast, half, calf, calm, alms, halt, hearth, dart, star, start, car, back, father, heart, park, part, clerk, laugh, dark, open.

13:1 In producing/3: /sound the centre of the tongue is raised up to the middle of the mouth, the lips are spread while the sides of the tongue are kept in contact with the lower teeth.

In producing/:/sound the back of the tongue is raised up to middle of the mouth, the lips are rounded while the mouth is almost closed.

Educational Review
« Interference: Introduction And levels of interference in language Definition and Classification Of Correspondence »